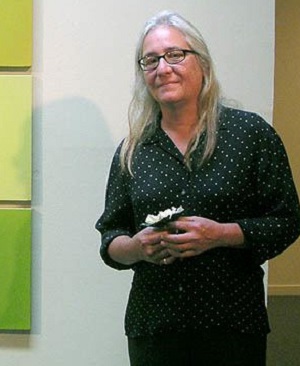 Anne Appleby is an American color field painter. Her works, always bearing titles from the natural world---"Sweet Pine", "Summer Aspen", "Gem"---are simple arrangements of colored canvas panels. Each panel is, at a glance, monochromatic, but closer inspection reveals deep and luminous gradations of hue, incremental tonal variations. Although associated by some with reductivism/minimalism, Appleby comes with a different philosophy, as her glowing fields of colors are inspired by landscapes and plants.

Appleby grew up in Pennsylvania, and moved to Montana at age 17. She received her B.F.A. in 1977 from the San Francisco Art Institute. Before attending the Art Institute in San Francisco, Appleby spent a fifteen year apprenticeship with an Ojibwe Indian elder in Montana. She learned patient observation of nature from him. Appleby would watch and translate into color the amazing cycles in her vast backyard of Montana. Leaves, stems, buds, fruit, seeds and more are transformed into two-dimensional portraits of captured moments in nature's fluid evolution. She has started exhibiting in the early '80s, but only achieved moderate success before the mid '90s. Currently her CV counts more than 30 solo exhibitions, 3 awards and artworks present in a few museums, including the San Francisco MoMA.

Now, she lives at the edge of a national forest in St. Helena, Montana. She shows her paintings primarily at San Francisco’s Gallery Paule Anglim. She has worked in printmaking since 1997 at Crown Point Press.

Anne Appleby (born 1954) is an American color field and landscape reductive painter, who lives and works in Jefferson City, Montana.

Anne Appleby was born in 1954 in Harrisburg, Pennsylvania. She received her Bachelor of Fine Arts in 1977 from the University of Montana and her Master of Fine Arts in 1989 from the San Francisco Art Institute. Before attending the Art Institute, Appleby spent a fifteen-year apprenticeship with an Ojibwe Indian elder in Montana. From him, she learned her patient observation of nature. Appleby lives in Jefferson City, Montana.

Appleby's works were described by the ArtZone 461 Gallery as "simple arrangements of colored canvas panels", with titles that take inspiration from "the natural world". Although panels may initially appear monochromatic, they are actually "deep and luminous gradations of hue." Appleby's work is often shown with that of "reductive" painters, but it does not exactly fit into the "pure" painting philosophy held by many of them. In 2004, Kenneth Baker wrote that, "using no forms except monochrome panels, Appleby must struggle often with the potential problem of repetition. But [she] achieves a freshness and distinctness that persuade a viewer that she means each one. It is as if she has learned to translate energy of intent directly into radiance of color."

She has participated in group exhibitions in institutions such as the Tacoma Art Museum in Washington, the American Academy in Rome, and the San Francisco Museum of Modern Art, where in 1996 she was awarded the SFMoMA SECA Art Award. She was also the 1999 recipient of the Biennial Award from the Louis Comfort Tiffany Foundation in New York. Appleby shows her paintings primarily at San Francisco’s Anglim Gilbert Gallery.