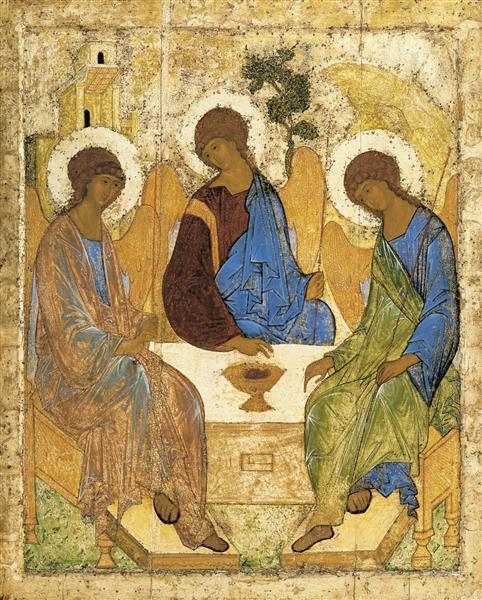 The Trinity (Russian: Троица, tr. Troitsa, also called The Hospitality of Abraham) is an icon created by Russian painter Andrei Rublev in the 15th century. It is his most famous work and the most famous of all Russian icons, and it is regarded as one of the highest achievements of Russian art. Scholars believe that is it one of only two works of art (the other being the Dormition Cathedral frescoes in Vladimir) that can be attributed to Rublev with any sort of certainty.

The Trinity depicts the three angels who visited Abraham at the Oak of Mamre (Genesis 18:1–8), but the painting is full of symbolism and is interpreted as an icon of the Holy Trinity. At the time of Rublev, the Holy Trinity was the embodiment of spiritual unity, peace, harmony, mutual love and humility.

The icon was commissioned to honour Saint Sergius of Radonezh of the Trinity Lavra of St. Sergius, near Moscow, now in the town of Sergiyev Posad. Little is known about The Trinity's history, and art historians make suggestions based on only the few known facts. Even the authorship of Rublev has been questioned. Various authors suggest different dates, such as 1408-1425, 1422-1423 or 1420-1427. The official version states 1411 or 1425-27. The Trinity is currently held in the Tretyakov Gallery in Moscow.

The Trinity was painted on a vertically aligned board. It depicts three angels sitting at a table. On the table, there is a cup containing the head of a calf. In the background, Rublev painted a house (supposedly Abraham's house), a tree (the Oak of Mamre), and a mountain (Mount Moriah). The figures of angels are arranged so that the lines of their bodies form a full circle. The middle angel and the one on the left bless the cup with a hand gesture. There is no action or movement in the painting. The figures gaze into eternity in the state of motionless contemplation. There are sealed traces of nails from the icon's riza (metal protective cover) on the margins, halos and around the cup.

The icon is based on a story from the Book of Genesis called Abraham and Sarah's Hospitality or The Hospitality of Abraham (§18). It says that the biblical Patriarch Abraham 'was sitting at the door of his tent in the heat of the day' by the Oak of Mamre and saw three men standing in front of him, who in the next chapter were revealed as angels. 'When he saw them, Abraham ran from the tent door to meet them and bowed himself to the earth.' Abraham ordered a servant-boy to prepare a choice calf, and set curds, milk and the calf before them, waiting on them, under a tree, as they ate (Genesis 18:1–8). One of the angels told Abraham that Sarah would soon give birth to a son.

The subject of The Trinity received various interpretations at different time periods, but by the 19th-20th century the consensus among scholars was the following: the three angels who visited Abraham represented the Christian Trinity, "one God in three persons" – the Father, the Son (Jesus Christ), and the Holy Spirit. Art critics believe that Andrei Rublev's icon was created in accordance with this concept. In his effort to uncover the doctrine of the Trinity, Rublev abandoned most of the traditional plot elements which were typically included in the paintings of the Abraham and Sarah's Hospitality story. He did not paint Abraham, Sarah, the scene of calf's slaughter, nor did he give any details on the meal. The angels were depicted as talking, not eating. "The gestures of angels, smooth and restrained, demonstrate the sublime nature of their conversation". The silent communion of the three angels is the centre of the composition.