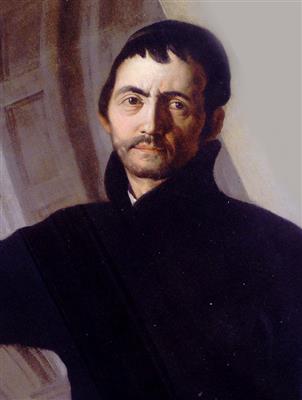 
Pozzo was best known for his grandiose frescoes using the technique of quadratura to create an illusion of three-dimensional space on flat surfaces. His masterpiece is the nave ceiling of the Church of Sant'Ignazio in Rome. Through his techniques, he became one of the most noteworthy figures of the Baroque period. He is also noted for the architectural plans of Ljubljana Cathedral (1700), inspired by the designs of the Jesuit churches Il Gesù and S. Ignazio in Rome.


Born in Trento (then under Austrian rule), he studied Humanities at the local Jesuit High School. Showing artistic inclinations he was sent by his father to work with an artist; Pozzo was then 17 years old (in 1659). Judging by aspects of his early style this initial artistic training came probably from Palma il Giovane. After three years he came under the guidance of another unidentified painter from the workshop of Andrea Sacchi who appears to have taught him the techniques of Roman High Baroque. He would later travel to Como and Milan.


On 25 December 1665, he entered the Jesuit Order as a lay brother. In 1668, he was assigned to the Casa Professa of San Fidele in Milan, where his festival decorations in honour of Francis Borgia recently canonised (1671) met general approval. He continued artistic training in Genoa and Venice. His early paintings attest the influence of the Lombard School: rich colour, graphic chiaroscuro. When he painted in Genoa the Life of Jesus for the Congregazione de' Mercanti, he was undoubtedly inspired by Peter Paul Rubens.


Pozzo's artistic activity was related to the Jesuit Order's enormous artistic needs; many Jesuit churches had been built in recent decades and were devoid of painted decoration. He was frequently employed by the Jesuits to decorate churches and buildings such as their churches of Modena, Bologna and Arezzo. In 1676, he decorated the interior of San Francis Xavier church in Mondovì. In this church one can already see his later illusionistic techniques: fake gilding, bronze-coloured statues, marbled columns and a trompe-l'œil dome on a flat ceiling, peopled with foreshortened figures in architectural settings. This was his first large fresco.


In Turin (1678) Pozzo painted the ceiling of the Jesuit church of SS. Martiri. The frescoes gradually deteriorated through water infiltration. They were replaced in 1844 by new paintings by Luigi Vacca. Only fragments of the original frescoes survive.


In 1681, Pozzo was called to Rome by Giovanni Paolo Oliva, Superior General of the Jesuits. Among others, Pozzo worked for Livio Odescalchi, the powerful nephew of the pope, Innocent XI. Initially he was used as a stage designer for biblical pageants, but his illusionistic paintings in perspective for these stages soon gave him a reputation as a virtuoso in wall and ceiling decorations.


His first Roman frescoes were in the corridor linking the Church of the Gesù to the rooms where St. Ignatius had lived. His trompe-l'œil architecture and paintings depicting the Saint's life for the Camere di San Ignazio (1681–1686), blended well with already existing paintings by Giacomo Borgognone.