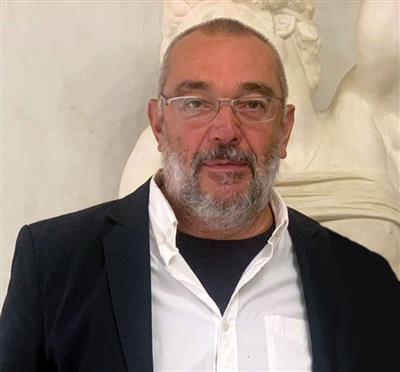 Andrea Benetti was born in Bologna in 1964. He is a painter, photographer and designer. In 2006, he drew up the Manifesto of Neo-Cave Art, presented in 2009 at the 53rd Venice Biennale, at the Ca' Foscari University. The Manifesto is inspired by the birth of art, by the cave painting of Prehistory. Andrea Benetti's artistic poetics transfigures, quotes, reinvents and plays with ideas and forms of cave painting, creating an imaginary bridge, between contemporaneity and the origin of art. For over ten years, the Bolognese artist has been carrying out projects in collaboration with various Italian and foreign universities, including Johns Hopkins University, the universities of Bologna, Ferrara, Bari, Roma Tre, Lecce and Bergamo. Over the years, some universities have included Andrea Benetti's Neo-Cave Art in the research program. His works have been acquired by museums and various institutional collections around the world, including that of the United Nations, the Quirinale (seat of the Presidency of the Italian Republic), the Italian Chamber of Deputies, the Vatican and some Italian Embassies around the world. In the last decade, Andrea Benetti has been received at the Quirinale, the Chamber of Deputies and the Vatican. He met Pope Benedict XVI in 2012 and Pope Francis in 2014. Many university professors and important art critics wrote about his painting, actively participating in the projects conceived by the Emilian artist. Since 2015, the voice "Andrea Benetti" is present in the Treccani encyclopedia (one of the most important encyclopedias in the world) and on Wikipedia the voice is translated into 30 languages. In 2020, Andrea Benetti was awarded the 49th “Nettuno d'Oro” prize, the longest-running and most prestigious artistic prize in the city of Bologna.

Andrea Benetti (born 15 January, 1964) is an Italian painter, the author of the Manifesto of Neo Cave Art presented in 2009, at the 53rd Venice Biennale, at the Ca' Foscari University.


Andrea Benetti is an Italian painter, photographer and designer, born in Bologna in 1964. In 2006 he authored the Manifesto of Neo-Cave Art, which he presented at the 53rd Venice Biennale of Art in 2009.
His art is inspired by a direct reference and indirectly to the first forms of art made by prehistoric man. From the cave works, Benetti borrowed their stylistic features from a creative point of view, creating works crowded with stylized zoomorphic and anthropomorphic motifs, geometric shapes and abstract shapes, with fields of color, as if to create an ethical and philosophical bridge between prehistory and contemporaneity, emphasized by 'use of vegetable pigments and techniques such as bas-relief and graffiti.
His work is present in the main national and foreign art collections (such as those of the United Nations, the Vatican and the Quirinale), among his most recent exhibitions are "Colors and sounds of the origins" (Bologna, Palazzo D'Accursio, 2013), "VR60768 · anthropomorphic figure" (Rome, Chamber of Deputies, 2015), "Pater Luminum" (Gallipoli, Civic Museum, 2017) and "Faces against violence" (Bologna, Palazzo D'Accursio, 2017).
In 2020 the artist was awarded the "Nettuno Prize" of the city of Bologna.


Private and institutional museums and art collections, which have acquired the works of Andrea Benetti