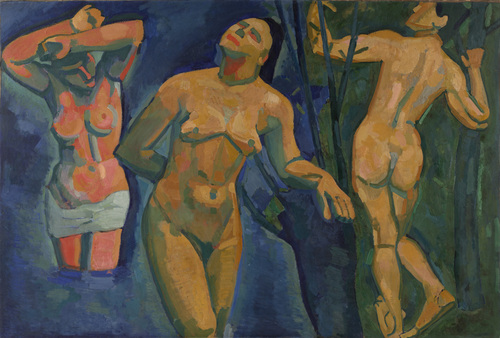 André Derain’s painting Bathers (1907) marks the final phase of the Fauvism, which was characterized by the dominant influence of the art of Paul Cézanne. This brief period called ‘Cézannism’ represents a phase in which the final stages of Fauvism overlapped with early Cubism. Derain’s painting Bathers was exhibited at the 1907 Salon des Indépendants (The Salon of Independent Artists). The painting still had the vivid and intense colors of Fauvism, but Derain modeled the angular forms after Cézanne. Even though Cézannism took shape in 1907, Cézanne was a topic of discussion among Fauvist artists long before. Derain was well acquainted with Cézanne work: there were forty-two Cézanne paintings at the 1904 Salon d’Automne (Autumn Salon) exhibition, ten at 1905 exhibition and ten at the 1906 exhibition. His friend and fellow Fauvist, Henri Matisse purchased Cézanne’s Three Bathers (1879-1882) in 1899. Additionally, a 1910 photograph of Derain shows that the artist kept a reproduction of Cézanne’s Five Bathers (1885-1887) in his studio.

Thus, although Derain’s Bathers were built upon the themes of his earlier paintings, The Dance (1906) and The Golden Age (1905), the subject was also a reference to Cézanne’s Bather series. Unlike earlier works, that focused on flat colorful surfaces, in Bathers the principal concern was with angular planes and sculptural forms. Derain mixed several influences in Bathers: while the figures bear some similarity to Cézanne’s fleshy nudes, the other dominant influence is African art and culture. In 1905, Derain and painter Maurice Vlaminck began visiting the Musée du Trocadéro, which had a collection of tribal art and African masks. Around the same time, Derain began collecting African art, a collection he built up between the years 1906 and 1910. The influence of African sculpture is seen in the angular faces of the bathers. More specifically, the central figure was possibly modeled after a mask that Derain purchased from Vlaminck. A different possibility is that he modeled the central head after the block-like forms of French Congo sculptures. The pose of the bather on the left side was similar to Derain’s stone sculpture Standing Figure (1907), which was also inspired by African sculpture.

Bathers shows Derain’s innovative thinking: he completed the painting before the 1907 Cézanne retrospectives and before Pablo Picasso’s famous Les Demoiselles d'Avignon (1907). Scholars have debated the connection between Derain’s Bathers and Picasso Les Demoiselles d'Avignon, some arguing that Picasso influenced Derain’s transition from Fauvism to Cézannism. Others claimed the opposite, that in fact Picasso was indebted to Derain, who made some of the early strides toward Cubism. However, what is most likely is that Picasso and Derain worked independently during the same period with Cézanne as their chief inspiration. Moreover, in this period artists like Matisse, Derain, Picasso, Vlaminck and Georges Braque were all experimenting and discovering African art. Therefore, the similar interests of Cubists and Fauvists can account for Derain and Picasso reaching similar breakthroughs around the same time.