{{selectedLanguage.Name}}
Sign In Sign out
Action History
×
Home/ Collections / Early Dynastic Period (3150 – 2686 BC) .../ Ancient Egypt/ Weighing of the Heart (Book of the Dead for the Singer of Amun, Nany) 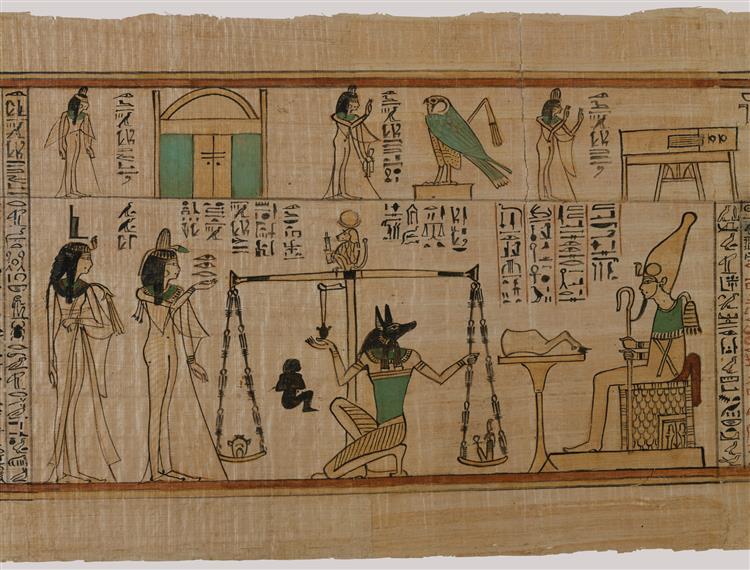 Weighing of the Heart (Book of the Dead for the Singer of Amun, Nany)

Archaeologists found this papyrus in the burial of Nany, a woman in her seventies. She was a singer of the god Amun-Re. Nany also had the title "king's daughter," which probably means that she was a child of the high priest of Amun and titular king, Painedjem I. As was customary during the Third Intermediate Period, Nany's coffins and boxes of shabtis (funerary figurines) were accompanied by a hollow wooden Osiris figure, which contained a papyrus scroll inscribed with a collection of texts called the "Book of Coming Forth by Day" – better known to us as the Book of the Dead. When unrolled, this scroll is more than seventeen feet long.

The scene depicted here shows the climax of the journey to the afterlife. Nany is in the Hall of Judgment. Holding her mouth and eyes in her hand, she stands to the left of a large scale. Her heart is being weighed against Maat, the goddess of justice and truth, who is represented as a tiny figure wearing her symbol, a single large feather, in her headband. On the right, Osiris, god of the underworld and rebirth, presides over the scene. He wears the white crown of Upper Egypt and the curving beard of a god. His body is wrapped like a mummy except for his hands, which clasp a crook. On the table before him is an offering of a joint of beef. Canine-headed Anubis, overseer of mummification, adjusts the scales, while a baboon—symbolizing Thoth, the god of wisdom and writing—sits on the balance beam and prepares to write down the result. Behind Nany stands the goddess Isis, both wife and sister of Osiris. She is identified by the hieroglyph above her head.

In this scene, Nany has been found truthful and therefore worthy of entering the afterlife. Anubis says to Osiris, "Her heart is an accurate witness," and Osiris replies," Give her her eyes and her mouth, since her heart is an accurate witness." In the horizontal register above the judgment scene, Nany appears in three episodes: worshipping the divine palette with which all is written, praising a statue of Horus in his falcon form, and standing by her own tomb.

Museum excavations, 1928-29. Acquired by the Metropolitan Museum in the division of Finds, 1930.