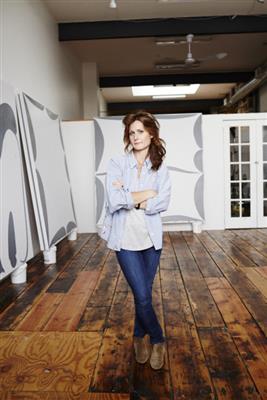 
Amy Feldman received a BFA degree in painting from the Rhode Island School of Design in Providence, Rhode Island in 2003. She then attended Rutgers University in New Brunswick, New Jersey where she received an MFA in Painting in 2008. She subsequently attended the Skowhegan School of Painting and Sculpture for a nine-week residency in 2009.


Feldman's work has been shown in galleries and museums since 2008. Her work is planned, casualist and spontaneously painted with loosely geometric, graphic gestures in whites to dark grays on various whites to gray grounds. The stark contrast between figure and ground in Feldman's paintings is initially arresting, then subsequently complicated, exploratory, and meditative. Feldman's bold, urgent, and large scale abstract paintings are often anthropomorphic and darkly humorous with psychologically charged imagery. Her stripped down abstract sign system addresses, among other things, topology, morphology, and the perception and transmission of information. Feldman's artistic influences range from Cubism to the works of Henri Matisse, Jean Arp, Ellsworth Kelly, Shirley Jaffe, Mary Heilmann and Robert Ryman.


Feldman's work is in the permanent collections of the Museum of Contemporary Art in Chicago, the Sheldon Museum of Art in Lincoln, Nebraska, the Hall Art Foundation | Schloss Derneburg Museum in Derneburg, Germany, and the Vanhaerents Art Collection in Brussels, Belgium. She lives and works in Brooklyn, New York.