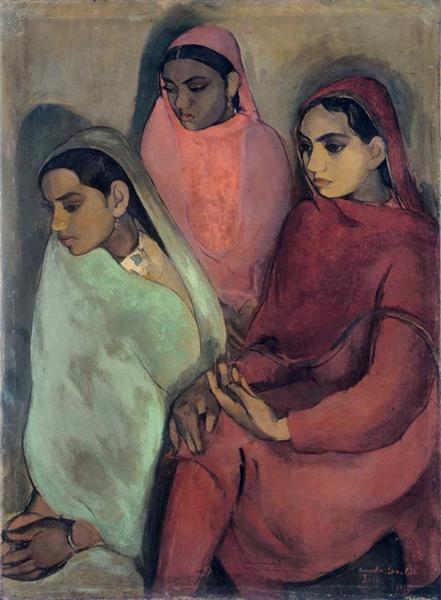 Three Girls is a painting by Amrita Sher-Gil, an Indian artist. It was painted in 1935; the first work to be painted by Sher-Gil after returning to India from Europe in 1934. Sometimes referred to as Group of Three Girls, the painting won the Gold Medal at the annual exhibition of the Bombay Art Society in 1937. The painting was part of a batch sent to Nawab Salar Jang of Hyderabad who later rejected them all.

The painting shows three colourfully dressed women contemplating a destiny they are unable to change. Amrita Sher-Gil did not sensualise her women but instead portrayed them as facing great adversity yet having the spirit to transcend a destiny that they were unable to change. Sher-Gil wrote: "I realized my real artistic mission, to interpret the life of Indians and particularly the poor Indians pictorially; to paint those silent images of infinite submission and patience,... to reproduce on canvas the impression those sad eyes created on me."

The painting reflects the influence of the works of French painter Paul Gauguin on Sher-Gil's work. It also marks Sher-Gil's move from an earlier academic and realist style of painting that she had learned in Paris towards a flatter style with modern compositions, where line and colour are prominently used. In Three Girls, the girls' surrounding is not shown. Their situation is made evident through their facial expressions, their body language, and the skillful use of tones.