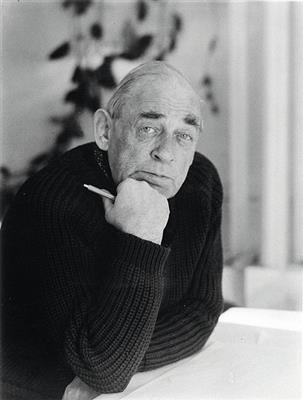 Hugo Alvar Henrik Aalto (pronounced [ˈhuɡo ˈɑlʋɑr ˈhenrik ˈɑːlto]; 3 February 1898 – 11 May 1976) was a Finnish architect and designer. His work includes architecture, furniture, textiles and glassware, as well as sculptures and paintings. He never regarded himself as an artist, seeing painting and sculpture as "branches of the tree whose trunk is architecture." Aalto's early career ran in parallel with the rapid economic growth and industrialization of Finland during the first half of the 20th century. Many of his clients were industrialists, among them the Ahlström-Gullichsen family. The span of his career, from the 1920s to the 1970s, is reflected in the styles of his work, ranging from Nordic Classicism of the early work, to a rational International Style Modernism during the 1930s to a more organic modernist style from the 1940s onwards. Typical for his entire career is a concern for design as a Gesamtkunstwerk, a total work of art, in which he – together with his first wife Aino Aalto – would design the building, and give special treatment to the interior surfaces, furniture, lamps and glassware. His furniture designs are considered Scandinavian Modern, in the sense of a concern for materials, especially wood, and simplification but also technical experimentation, which led him to receiving patents for various manufacturing processes, such as bent wood. As a designer he is celebrated as the inventor of bent plywood furniture. The Alvar Aalto Museum, designed by Aalto himself, is located in what is regarded as his home city Jyväskylä.


Hugo Alvar Henrik Aalto was born in Kuortane, Finland. His father, Johan Henrik Aalto, was a Finnish-speaking land-surveyor and his mother, Selma Matilda "Selly" (née Hackstedt) was a Swedish-speaking postmistress. When Aalto was 5 years old, the family moved to Alajärvi, and from there to Jyväskylä in Central Finland.


He studied at the Jyväskylä Lyceum school, where he completed his basic education in 1916, and took drawing lessons from local artist Jonas Heiska. In 1916, he then enrolled to study architecture at the Helsinki University of Technology. His studies were interrupted by the Finnish Civil War, in which he fought. He fought on the side of the White Army and fought at the Battle of Länkipohja and the Battle of Tampere.


He built his first piece of architecture while a student; a house for his parents at Alajärvi. Later, he continued his education, graduating in 1921. In the summer of 1922 he began military service, finishing at Hamina reserve officer training school, and was promoted to reserve second lieutenant in June 1923.


In 1920, while a student, Aalto made his first trip abroad, travelling via Stockholm to Gothenburg, where he briefly found work with architect Arvid Bjerke. In 1922, he accomplished his first independent piece at the Industrial Exposition in Tampere. In 1923, he returned to Jyväskylä, where he opened an architectural office under the name 'Alvar Aalto, Architect and Monumental Artist'. At that time he wrote articles for the Jyväskylä newspaper Sisä-Suomi under the pseudonym Remus. During this time, he designed a number of small single-family houses in Jyväskylä, and the office's workload steadily increased.