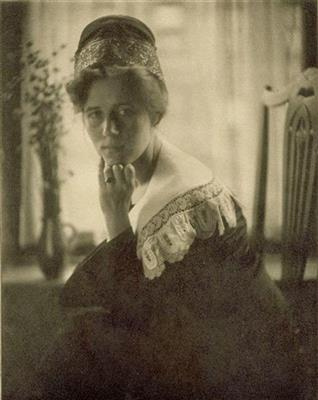 Alice Boughton (14 May 1866 – 21 June 1943) was an early 20th-century American photographer known for her photographs of many literary and theatrical figures of her time. She was a Fellow of Alfred Stieglitz's Photo-Secession, a circle of photographers whose artistic efforts succeeded in raising photography to a fine art form.

Alice Boughton was born in Brooklyn, New York, on 14 May 1866. Her parents were Frances Ayres and William H. Boughton, a lawyer in New York.

As educational opportunities were made more available in the 19th-century, women artists became part of professional enterprises, including founding their own art associations. Artwork made by women was considered to be inferior, and to help overcome that stereotype women became "increasingly vocal and confident" in promoting women's work, and thus became part of the emerging image of the educated, modern and freer "New Woman". Artists then, "played crucial roles in representing the New Woman, both by drawing images of the icon and exemplyfying this emerging type through their own lives."

In the 1880s, Boughton began studying art and photography at the Pratt School of Art and Design. It was there that she met fellow student Gertrude Käsebier, with whom she later studied in Paris. Käsebier also employed her an assistant in her studio, most likely at the same time Boughton was studying at Pratt.

In 1890, she opened her own portrait studio on East 23rd Street in New York, which she maintained for the next forty years. In 1904, she sent a letter to William Butler Yeats that listed a studio address on Madison Avenue, indicating that she established or used more than one studio for at least a brief period.

Around 1901, Boughton studied art in Rome and photography in Paris, where she worked in Käsebier’s summer studio. She won an honorable mention for her work at the Turin International Decorative and Fine Arts Exhibition in 1902.

It is not known when she met Alfred Stieglitz, but it is clear he knew of and admired her work by 1902 when he included two of her works in the inaugural exhibition at his Little Galleries of the Photo-Secession in New York City. Four years later, in 1906, Boughton was appointed by Stieglitz as a Fellow of the Photo-Secession. The following year Stieglitz gave her, along with fellow photographers C. Yarnall Abbot and William B. Dyer, an exhibition at the Little Galleries. In 1909 she had six of her photographs and an essay called “Photography, A Medium of Expression” published in Stieglitz's journal Camera Work (No 26, April, 1909).

During this same period, her photographs were included in major exhibitions around the world, including shows in London, Paris, Vienna, The Hague and New York.

Boughton became one of the most distinguished portrait photographers of New York, although she did many landscapes in this country and Europe including the famous Rockefeller estate Kykuit at Pocantico Hills, New York. She produced studies of children, as well as female nudes in allegorical or natural settings. Among her more famous works are portraits of Eugene O'Neill, Albert Pinkham Ryder, George Arliss and Robert Louis Stevenson. Her portrait of Robert Louis Stevenson was an inspiration for John Singer Sargent's own portrait of the writer.