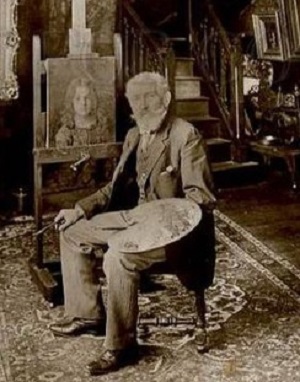 Alexey Kharlamov in his workshop (detail), 1890

Alexei Alexeievich Harlamov (also Alexej Harlamoff, Alexei Kharlamoff or Alexej Charlamoff) (1840–1925) was a Russian painter, who usually signed his name in the Latin alphabet as Harlamoff.


Alexei Harlamoff was born into a family of serfs on 18 October 1840 in the village of Dyachevka near Saratov on the River Volga. In 1850 Harlamoff's parents won their freedom. Harlamoff became a guest student at the Imperial Academy of Arts in Saint Petersburg in 1854. Three years later he was awarded a second class silver medal for a drawing.


In 1862 Harlamoff was awarded a second class silver medal for a sketch, and he enrolled with the historical painter Alexey Tarasovich Markov. In 1863 he was awarded two first class silver medals, for a drawing and for a sketch. In 1865 he presented his large scale painting Ananias before the Apostles, but did not win the competition for a second class gold medal. The next year however he did win this award, for his painting Baptizing of the Kiever. He completed his studies in 1868, winning a first class gold medal for his Return of the Prodigal Son, and was granted a scholarship from the academy to study in Paris in 1869.


In 1870 Tsarina Maria Alexandrovna bought one of Harlamoff's paintings. In April he sent his first letter from Paris to Saint Petersburg. He spent September and October of that year in Normandy and the southern Netherlands with Alexey Bogolyubov, C. Huhn, and A. Lavezzari. He also travelled to Brussels and to London, where he visited an exhibition of Old Masters. In November the Academy of Arts commissioned him to copy Rembrandt’s Anatomy Lesson of Dr. Tulp, and he stayed in The Hague.


From Spring 1871 to Autumn 1872 Harlamoff copied The Anatomy Lesson of Dr. Tulp in a drawing and in oil. During the summer of 1871 he returned to Normandy. In November 1872 the Imperial Academy in Saint Petersburg paid him 1,500 roubles for the copy of Rembrandt.


In 1872 Harlamoff met Léon Bonnat and visited his independent studio. He was also awarded a bronze medal at the Vienna Universal Exhibition. The conference secretary of the Academy of Arts, Peter F. Iseyev, rejected Bogolyubov's request to grant Harlamoff a professorship. In December Bogolyubov reported to the council of the Imperial Academy of Arts on Harlamoff's visible success under the guidance of Bonnat.


By 1874 Harlamoff was living at rue Fontaine 42. He took part in the spring exhibition of the Imperial Academy of Arts. His portrait of the engraver Pozhalostin won him the title of art academy member. From April onwards Harlamoff joined the drawing evenings at Bogolyubov's residence in rue de Rome, 95. Around this time Ivan Turgenev mentioned Harlamoff for the first time in a letter, and his paintings are bought by Bogolyubov, the Parisian art dealer Adolphe Goupil and the Muscovite collector Dimitri P. Botkin. Harlamoff began socialising with Turgenev and other Russian artists in Paris. He was frequently invited for dinner with Louis Viardot and Pauline Viardot-Garcia in rue Douai 50, where Turgenev occupied the top floor. In June Harlamoff painted a portrait of Tsar Alexander II in Bad Ems, possibly spending the rest of the summer in Spain. He then travelled to Veules-les-Roses and Étretat. In October Turgenev wrote that Harlamoff had completed the portrait of Pauline Viardot, for which he was paid 3.000 FFR, leading to an increase of his fees for a portrait up to 10.000 FFR (around 3.000 roubles).