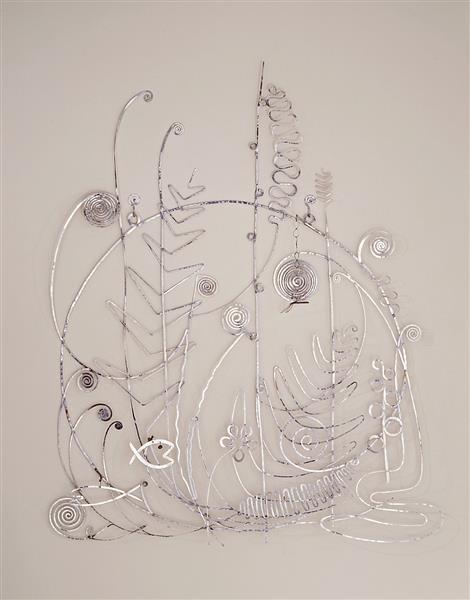 In New York in the winter of 1945–46, Peggy Guggenheim commissioned Alexander Calder to make a silver bedhead. His design combines fish, insect, and plant motifs in an exuberant conflation of the worlds of sea and garden. The two fish at the lower left are free-hanging elements. The outer curve of a large spiral comprises the basic circular structure of the bedhead, which is elaborated with decorations of hammered and cut silver. Although these botanical forms are fixed permanently in position, their curving, twisting contours nonetheless convey a sense of perpetual natural motion.

Calder first twisted wire into three-dimensional forms in his wire sculptures of the mid-1920s. Subsequently, he twisted, cut, and hammered wire and gold, silver and brass into jewelry for his friends and patrons. It has been suggested that the delicate and slender forms of some of Calder’s metal constructions of the early 1940s are indebted to his jewelry of the 1930s, which included both simple animal motifs and curvilinear or spiraling abstract forms.² Calder’s book illustrations also contributed to the development of a graphic lyricism in his sculpture. Many of the vegetal forms in the bedhead share the spontaneity and inventiveness of Calder’s line-etching illustrations. In particular, the soaring zigzag fern motif on the left and the numerous spiral-shaped blossoms anticipate the illustrations executed in 1946 for Eunice Clark’s Fables of La Fontaine (for example, the “Stag and the Vine”).

The compressed, shallow relief of this piece answers neatly the practical demands of Guggenheim’s commission for a bedhead. This project allowed Calder to exercise his calligraphic skills not only in the more conventional realm of book illustration but also in drawing on a blank wall with a line of silver metal. The worked surface of the hammered silver, which reflects light in countless directions, adds variety and a three-dimensional presence to each of Calder’s lines.