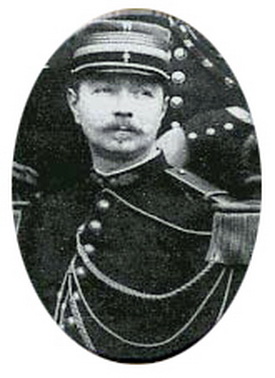 Albert Dubois-Pillet (28 October 1846 – 18 August 1890) was a French Neo-impressionist painter and a career army officer. He was instrumental in the founding of the Société des Artistes Indépendants, and was one of the first artists to embrace Pointillism.

Louis-Auguste-Albert Dubois was born on 28 October 1846 in Paris. Shortly thereafter, his family moved to Toulouse, where he was raised. In 1867, he graduated from l'Ecole Impériale Militaire in Saint-Cyr and began his career as a military officer. He remained in the army for the rest of his life.

From 1870 to 1871, he served in the Franco-Prussian War, during which the Germans captured him and held him in Westphalia, Prussia as a prisoner of war. After his release, he resumed a post in the Versailles army. Throughout the 1870s he was stationed at several different provincial posts. He received an appointment in 1879 or 1880 to la Légion de la Garde Républicaine (the Republican Guard) in Paris.

Although self-taught, with no formal art education, he proved to be a talented artist. The official Paris Salon accepted one of his still lifes in 1877, and another one in 1879. However, after his arrival in Paris, he created paintings which were somewhat more experimental, and his submissions were rejected by The Salons from 1880 to 1883.

Beginning in 1884, he attempted to hide his art-related activities from the military by disguising his name – he added "Pillet", his mother's maiden name, to his name, signing his artworks "Dubois-Pillet".

His painting Enfant Mort (Dead Child), completed in 1881, was displayed at the May 1884 Tuileries Exhibition, where it caught the attention of Émile Zola, who used it as his inspiration for a scene in his 1886 novel L'Œuvre. In the book, artist Claude Lantier, distraught over his son's death, finds himself compelled to create a painting of his dead child.

The Tuileries Exhibition was a one-time event with a goal similar to that of 1863's Salon des Refusés which showed works that had been rejected by the Salon. Dubois-Pillet envisioned a permanent alternative to the official Salon. He met with some of the other exhibitors, and he, Georges Seurat, Paul Signac, and Odilon Redon became the "founding fathers" of the Société des Artistes Indépendants. Dubois-Pillet structured the organization and, within less than a week, wrote and published its statutes, which are largely still in effect. The society was officially formed on 29 July 1884, and their first exhibition, which opened on 1 December 1884, included work by Dubois-Pillet. He used his connections to secure desirable venues and terms for their exhibitions, was the primary organizer of the group until 1888, and was a regular exhibitor with them until 1889.

Around 1885, probably influenced by his friendships with Seurat and others, he began experimenting with Divisionist techniques, and he embraced Pointillism – one of the first artists to do so. By the next year, his works were fully Neo-impressionist. With Signac, he used pen and ink to create pointillist drawings. Dubois-Pillet's studio-apartment served as the unofficial Neo-impressionist headquarters during the movement's early years. Some of his pointillist work is composed with "photographic precision".