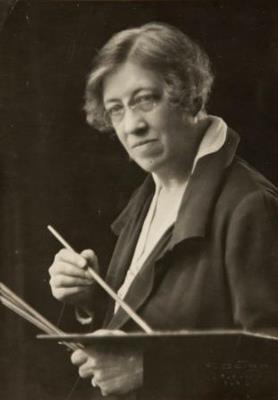 
Her early art training started with Arthur T. Woodward at the Bendigo School of Mines and Industries from 1898 to 1899, and in 1899 some of her work was raffled in Bendigo to partly finance her study in Paris. The years following World War I saw a virtual exodus of Australian artists on a sort of Grand Tour to Paris, all intent on being part of the explosion of the arts taking place there. Painters like Rupert Bunny, Stella Bowen and Max Meldrum were drawn there by the appeal of the Left Bank. Others like Margaret Preston and Grace Crowley were inspired to develop in new directions by post-war Parisian art.


Goodsir attended the Académie Delécluse, the Académie Julian and then the Académie Colarossi. From about 1912 she shuttled between London and Paris, but finally settled in Paris in 1921 at 18 rue de l'Odéon. Her companion was Rachel Dunn, depicted in several of her paintings, such as The Chinese Skirt 1933, Girl with Cigarette 1925, The Letter 1926 and Morning Tea 1925.


Her work was acclaimed and exhibited at the New Salon, the Salon des Indépendants, and the Société Nationale des Beaux-Arts in Paris as well as at the Royal Academy and the Royal Institute in London. On a short visit to Australia in 1927 she exhibited at the Macquarie Galleries in Sydney and the Fine Arts Gallery in Melbourne. In 1938 four of her oils were shown at the sesquicentennial exhibition at the NSW National Art Gallery.


Goodsir died in Paris, France in 1939, her paintings were left to her companion Rachel Dunn, who sent some 40 to Agnes's family in Australia and others to Australian galleries.