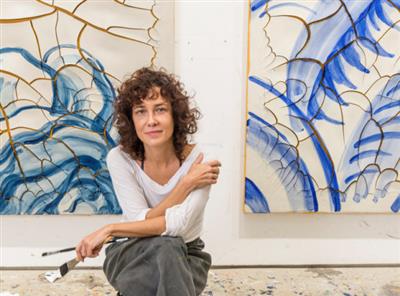 Adriana Varejão (born 1964, Rio de Janeiro) is a Brazilian artist. She works in various disciplines including painting, drawing, sculpture, installation and photography. She was an artist-in-resident at the Isabella Stewart Gardner Museum in 2004. Varejão lives and works in Rio de Janeiro.


References to the effects of colonialism of Brazil by Europe, are apparent in her work as well as art history and illusion. Her work alludes to expansion and transformation of cultural identity, yet continues the use of her theme of understanding the past, in order to understand the present. Her artistic style of layering paint evokes a metaphorical retelling and reimagination of Brazil's history in relation to Portugal and Europe.


Cultural anthropology, or the process of absorbing and incorporating foreign influence into native Brazilian culture, inspires much of Varejão’s work. This movement is evident throughout Brazil’s history into the present and the dichotomy of diversity and unity is a common theme amongst contemporary Brazilian artists. In Varejão’s works, she examines this theme within the contexts of race, body, identity, and the effects of colonialism.


Drawing upon tensions surrounding race and ethnicity in Brazil, Varejão uses installation, oil painting, and drawing to comment on the perception of race in Brazil in the twenty-first century. She often starts with a canvas, adding materials such as porcelain and ceramics. In her work entitled Polvo, exhibited at Lehman Maupin in 2014, Varejão combines color theory and casta (a social theory that influenced European paintings of Brazil’s conquest), to examine the norm of defining race in terms of skin color. The series of nearly identical self-portraits forming the bulk of the work were displayed with individualized titles that explained the portraits’ only differences: the titles were generated by the 1976 Brazilian census, which asked Brazilians for the first time to give their definitions of their own skin tone; the responses ranged from branquinha, “snow-white,” to morenão, roughly “big black dude.” Varejão provided the entranceway mural Cores Polvo in 2019 as a piece commissioned by Sesc Guarulhos, which dialogues with the 1976 Brazilian census on race and identity.


Many of Varejão's works appropriate the use of azulejos, traditional Portuguese blue tiles, and maps to comment on colonial legacies in Brazil. Employment of azulejos in Brazilian art is both transcultural and transmedial, directly linking Portugal's historical colonial influence to aspects of contemporary Brazilian society. The piece Proposal for a Catechesis: Part I Diptych: Death and Dismemberment (1993), for example, incorporates azulejos to evoke anthropophagy, a style of cultural cannibalism that was fundamental to the Brazilian modernist movement. Explicit references to artistic takes on anthropophagy are depicted in the series Tongues and Incisions (1997-2003) and Jerked Beef Ruins (2000-2004), among others, which draw attention to the tongue as a symbol for taste (cannibalism) and site of speech to critique colonial history. Varejão's use of skin-tone color pallettes and visceral textured painting techniques evokes the body and the mark of historical violence on it even when no body is explicitly portrayed.