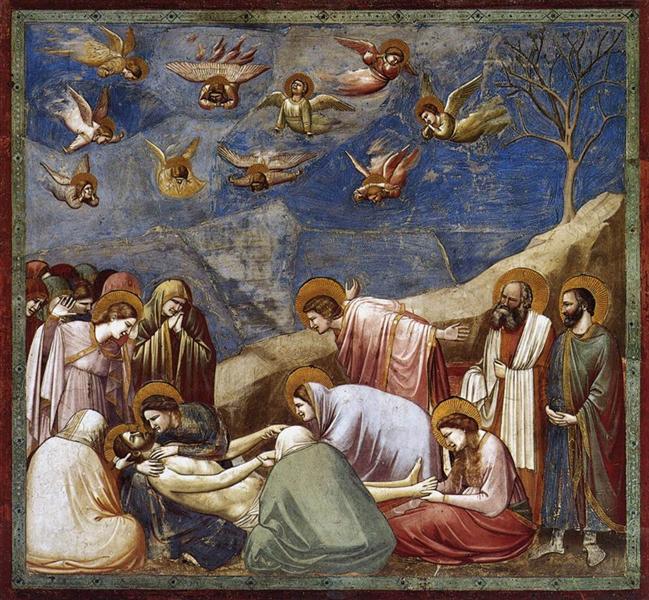 Lamentation (The Mourning of Christ), 1306 - Giotto

The cultural and artistic events of Italy during the period 1400 to 1499 are collectively referred to as the Quattrocento (Italian pronunciation: [ˌkwattroˈtʃɛnto]) from the Italian for the number 400, in turn from millequattrocento, which is Italian for the year 1400. Quattrocento encompasses the artistic styles of the late Middle Ages (most notably International Gothic) and the early Renaissance.

After the decline of the Western Roman Empire in 476, economic disorder and disruption of trade spread across Europe. This was the beginning of the Early Middle Ages, which lasted roughly until the 11th century, when trade picked up, population began to expand and the papacy regained its authority.

In the late Middle Ages, the political structure of the European continent slowly evolved from small, highly unstable fiefdoms into larger nation states ruled by monarchies, thereby providing greater stability. In Italy, urban centers arose that were populated by merchant and trade classes, who were able to defend themselves. Money replaced land as the medium of exchange, and increasing numbers of serfs became freedmen. The changes in Medieval Italy and the decline of feudalism paved the way for social, cultural, and economic changes.

The Quattrocento is viewed as the transition from the Medieval period to the age of the Renaissance, principally in the cities of Rome, Florence, Milan, Venice and Naples.

Quattrocento art shed the decorative mosaics typically associated with Byzantine art along with the Christian and Gothic media of and styles in stained glass, frescoes, illuminated manuscripts and sculpture. Instead, Quattrocento artists and sculptors incorporated the more classic forms developed by Roman and Greek sculptors.

Since the Quattrocento overlaps with part of the Renaissance movement, it would be inaccurate to say that a particular artist was Quattrocento or Renaissance. Artists of the time probably would not have identified themselves as members of a movement.

Also see the list of 27 prominent 15th century painters made contemporaneously by Giovanni Santi, Raphael Sanzio's father as part of a poem for the Duke of Urbino.