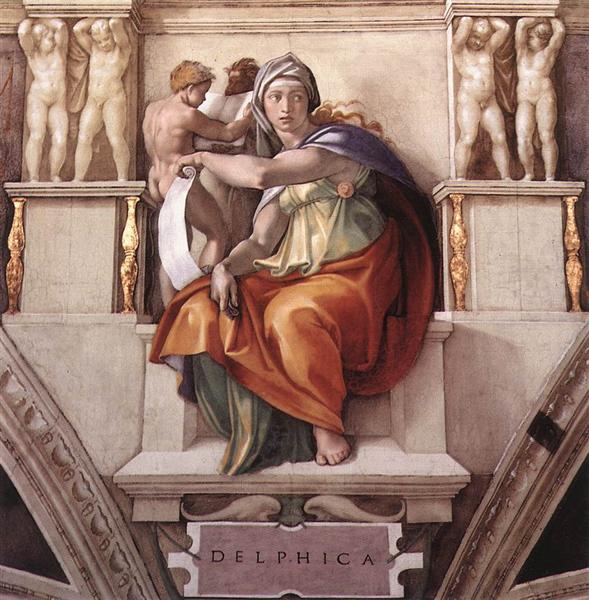 The High Renaissance, subsequently coined to denote the artistic pinnacle of the Renaissance, refers to a thirty-year period (c.1490-c.1527) exemplified by the groundbreaking, iconic works of art being made in Italy during what was considered a thriving societal prime. A rejuvenation of classical art married with a deep investigation into the humanities spurred artists of unparalleled mastery whose creations were informed by a keen knowledge of science, anatomy, and architecture, and remain today, some of the most awe-inspiring works of excellence in the historical art canon.

It wasn't until 1855 that a French historian Jules Michelet first coined the word Renaissance to refer to the innovative painting, architecture, and sculpture in Italy from 1400-1530. His use of the term was informed by Giorgio Vasari's mention of "rebirth" to describe the same period in his The Lives of the Most Excellent Painters, Sculptors, and Architects (1568).

The term was informed by 18th-century archeologist and art historian Johann Joachim Winckelmann's The History of Ancient Art in Antiquity (1764) characterizing the Classical art of the Greeks as the "High Style." Winckelmann's ground-breaking book launched the study of art history and became foundational to European intellectual life, as well as reaching a popular audience. He felt that the purpose of art was a beauty, an ideal obtained by the Greeks and in High Renaissance art, as he wrote, "the Italians alone known how to paint and figure beauty."

By the early 1800s the term Hochenrenaissance, German for High Renaissance, was used to refer to the period, defined as beginning around the time of Leonardo da Vinci's The Last Supper (1490s) and ending with the Sack of Rome by the army of Emperor Charles V in 1527. In the last thirty years, some contemporary scholars have criticized the term as being an oversimplification.

The High Renaissance began with the works of Leonardo da Vinci as his paintings, The Virgin of the Rocks (1483-1485), and, most notably, The Last Supper (1490s), exemplified psychological complexity, the use of perspective for dramatic focus, symbolism, and scientifically accurate detail. However, both works were created in Milan, and it wasn't until 1500 when Leonardo moved back to Florence, the thriving center of art and culture, that his work impacted the city. His study for The Virgin and Child with St. Anne (c. 1499-1503) was displayed at Santissimi Annunziata church where many artists went to study it.

Leonardo's Vitruvian Man (1490) was widely influential among artists of his own time, including Raphael and the architect Bramante, as well as later artists like Albrecht Dürer and William Blake.

The High Renaissance was dominated by a few celebrated masters and the competitive rivalries that developed between them as they vied, not only for noble patronage but also for supreme excellence in their art. In Florence, at the same time that crowds gathered to view Leonardo's cartoon for The Virgin and St. Anne, Michelangelo had become a rising star with his creation of the Pietà (c.1499). Michelangelo viewed sculpture as the pre-eminent art and, even in painting, sculpted the human form. With the creation of the iconic statue David (1501-1504), his reputation as the sculptor whose works exemplified the High Renaissance was established. David was given a central place in the city of Florence, upholding the city-state's spirit of defending its civil liberties.

A rivalry developed between Michelangelo and Leonardo, beginning in 1504 with their competing frescoes commissioned for opposing walls in the Hall of Five Hundred. As art critic Jonathan Jones wrote of Michelangelo, "He was fiercely competitive and needed to outdo Leonardo. It became a contest not of skill, in which they were both beyond compare, but imagination and originality. Leonardo, the older artist, was already famous not just as a gifted painter but a truly original mind... [Michelangelo] set out his claim to a similar kind of personal, unique vision." That personal vision can be seen in the artist's choice of a battle scene where nude bathers were attacked, thus allowing for a dynamic, and essentially sculptural, treatment of the male nude. The two frescos, Leonardo's The Battle of Anghiari (1503-1506), and Michelangelo's Battle of Cascina (1504-1506) were unfortunately not completed, as both men were pulled toward other commissions. Nevertheless, the works continued to influence other artists, notably Raphael, who would go on to copy the masterpieces in efforts to further their own artistic practices.

Rome became the artistic center of the High Renaissance due to the patronage of Pope Julius II, who reigned from 1503-1513. He was a noted art collector, owning the Laocoon (c. 40 BC) and the Apollo Belvedere (c. 120-140), along with other noted classical works, which became the foundation for the Vatican's art museums. He was a formidable personality who made the Papacy into an economic and military force that dominated much of Italy. His goal was to make Rome the cultural center of Europe instead of Florence. To achieve this, he ardently pursued the great artists of the day, persuading Raphael to move to Rome to paint the frescoes of the Vatican's papal apartments. After commissioning Michelangelo to create the papal tomb. he cajoled the reluctant sculptor into painting the Sistine Chapel ceiling (1508-1512). The Pope's ambition to rebuild St. Peter's Basilica and redesign the Vatican led him to recruit Bramante, Michelangelo, and Raphael into roles as architects of his grand plans. After Julius II's death, papal patronage of the arts continued under Pope Leo X, the son of Lorenzo de' Medici, patriarch of the ruling (and art-loving) family of Florence.

During the Early Renaissance years, the concepts of Humanism were widely promoted. Whereas the previous Gothic period's art had emphasized the idolization of the secular and the religious, artists in 14th century Florence were more concerned with man's place in the world. High Renaissance artists evolved this inquiry by exploring the concept of universal man, in other words, an individual of genius, divinely inspired, who could excel in all aspects of art and science. The term Renaissance man is still used today to describe a well-rounded and multi-talented person who exhibits mastery in a wide array of intellectual and cultural pursuits.

This ideal, developed from Leon Battista Alberti's "A man can do all things if he will," was exemplified in Leonardo da Vinci, as Vasari in his Lives of the Artists wrote, "In the normal course of events many men and women are born with remarkable talents; but occasionally, in a way that transcends nature, a single person is marvelously endowed by Heaven with beauty, grace and talent in such abundance that he leaves other men far behind, all his actions seem inspired and indeed everything he does clearly comes from God rather than from human skill. Everyone acknowledged that this was true of Leonardo da Vinci, an artist of outstanding physical beauty, who displayed infinite grace in everything that he did and who cultivated his genius so brilliantly that all problems he studied he solved with ease." This standard not only dominated the period but subsequent thinking on artistic ability, positioning the artist as a divinely inspired genius, rather than merely a noted craftsman.

The ideals and humanism that informed the High Renaissance continued to inspire the world beyond Italy, albeit with a notable stylistic and artistic variation. Its influence would reach into the North European Renaissance, exemplified by Albrecht Dürer, Pieter Bruegel, and others, and the Venetian School, led by Giorgione and Titian and the architect Palladio. Meanwhile, Correggio's quadratura works influenced the artists Carlo Cignani, Gaurdenzio Ferrari, Il Pordenone, and had a notable impact on Baroque and Rococo treatments of domes and ceilings.

Leonardo's death in 1519, followed by Raphael's death when he was only 37 years old the following year, marked a lessened vibrancy of the Italian High Renaissance. The sack of Rome by the armies of Holy Roman Emperor Charles V in 1527 ended the era. The brutal and terrifying event reduced the population of Rome from 55,000 to 10,000 and left the city in a state of collapse and financial ruin. The ideals of the High Renaissance no longer seemed tenable to many. Michelangelo's Last Judgment (1536-41) a fresco in the Sistine Chapel expressed the darker emotional tenor of the following decades. In sculpture, he turned to pietas and depictions of captive slaves such as his The Atlas Slave (1530-1534).

Michelangelo later approaches in expression influenced the Mannerists, including Jacopo Pontormo, Rosso Fiorentino, Giorgio Vasari, and Francesco Salviati. His figurative treatment, particularly of the male nude, influenced countless artists. Later artists of the Baroque period, the Neoclassicists, and the avant-garde movements of the 20th century were also widely influenced by the works of the Renaissance. For instance, Pablo Picasso drew upon Raphael in his Guernica (1937), referencing The Fire in the Borgo (1514), which depicted a woman handing her baby to those below as she leaned out of the burning building.

The works created by the artists of the Italian High Renaissance remain the most recognizable and popular works of art history. The Mona Lisa (c.1519), The Last Supper (1490s), The Creation of Adam (1512), and The Sistine Madonna (1513), have been reproduced on countless consumer items, referenced in popular songs, TV shows, videos, and often used in advertising.

Furthermore, the ideas of the High Renaissance - the artist as genius, the foundational nature of classical art, the individual as the center of the universe, the value of science and exploration, the emphasis on Humanism - have all deeply informed the social and cultural values of the world ever since.